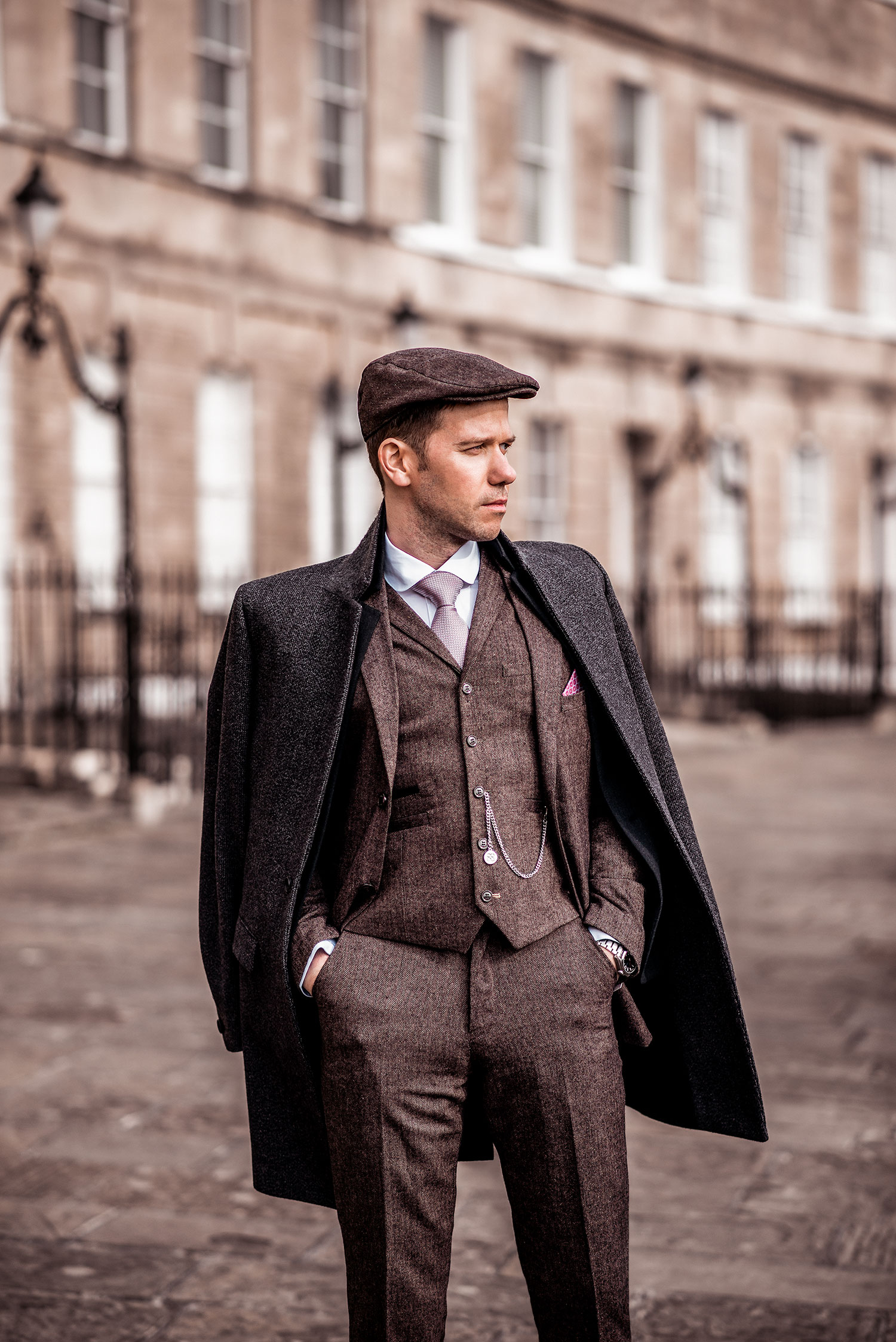 Peaky Blinders Tweed Outfit – How To Dress Like Thomas Shelby

The Peaky Blinders have undoubtedly captured the hearts of many, the criminal exploits and no-nonsense attitude of the Shelby gang have been a welcome addition to our TV screens. One thing is certain, their iconic dress code has caused a stir across the nation and even further afield, with countless men and women attempting to mimic their inimitable style.

Thomas Shelby and his crews’ reign of power began in the early 1920s, their style naturally reflecting the fashions of the time with tweed suits, oversized coats and of course their signature flat caps (which featured a hidden razor blade for close quarter combat). Despite storylines within the show depicting a romanticised portrayal of a criminal network, the Peaky Blinders did genuinely exist during that period in the Birmingham area of England. It is yet to be confirmed whether their leader shared Cillian Murphy’s strong bone structure and sharp jawline!

For this latest post on my men’s fashion blog, I have crafted together my particular modern take on the Peaky Blinders style from the show, read on and take a gander at the accompanying photos to gather some ideas for your own Peaky outfit. 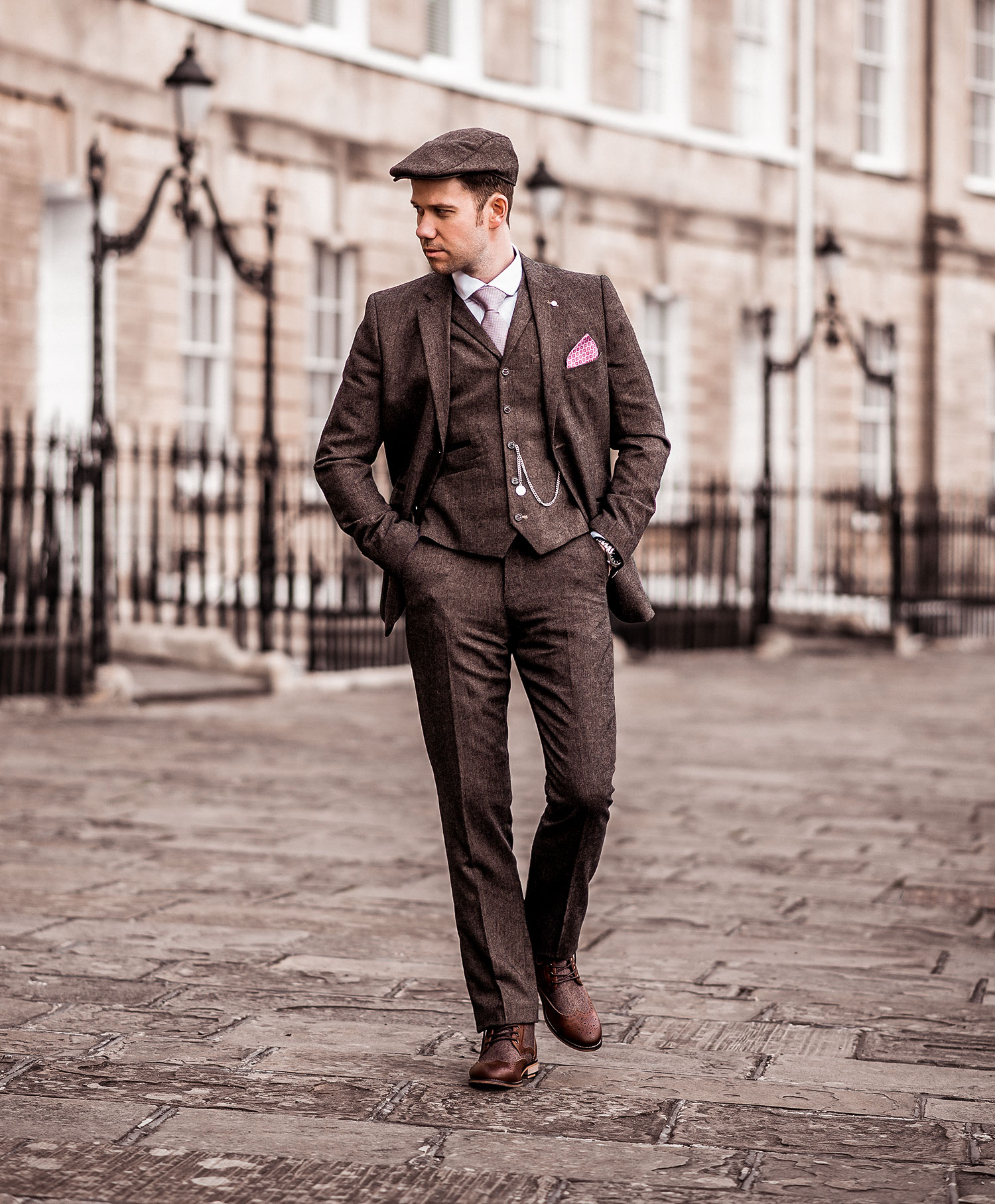 One of the most important aspects of their outfit is the tweed suit, usually as a three-piece. Popular during the first quarter of the 20th century, tweed was the typical cloth of the working man. Durable and heavy duty, ensuring the wearer would be protected from the relentless cold and wet weather.

In the show, the Shelby gang wear a variety of different types of suits, but each and everyone sports a tailored fit for an overall sleek appearance (an ill-fitting or baggy suit will look sloppy). Taking inspiration from the popularity of the show, clothing brands frequently promote a variety of Peaky Blinders inspired suits, yet often pushing vibrant and outlandish prints and patterns. During that era, the popular colours would have fallen largely into the muted bracket; if you want to stay true to the show, then I would advise a combination of plain blacks, browns or greys (charcoal looks particularly effective).

100% tweed fabric is quite expensive, especially if you are only dressing up as one of your favourite characters for a one-time event. Instead, you can shop more frugally by choosing suits from more affordable brands who offer blended fabrics which still look as good as their big-budget counterparts for a fraction of the price.

During the 1920s, suits would have been tailored with a regular fit in mind, in order for the wearer to have a broader freedom of movement. These days, men’s fashion points mostly towards a slim or even skinny fit, particularly in suits. With this in mind, I decided on a close cut fitting suit, envisioning a figure-hugging silhouette for a modern take on the Peaky Blinders ensemble.

Get the backbone of your Peaky Blinders outfit on point, and you are halfway there, I highly recommend the following online stores for your three-piece tweed suit. 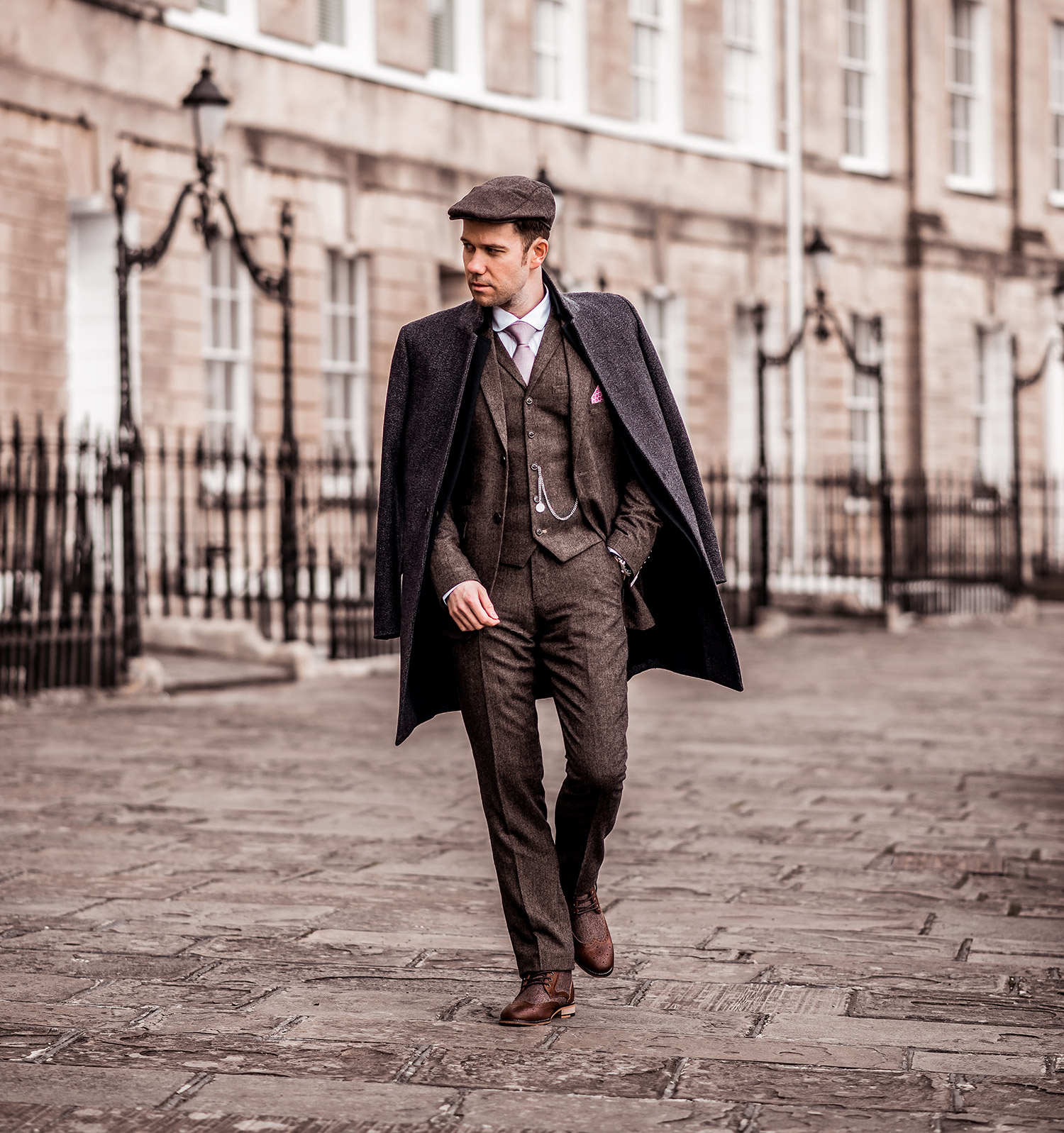 In the show, Thomas Shelby is often spotted wearing an overcoat, usually plain charcoal or solid black. Because they were intended to fit over multiple layers, it was custom for them to be slightly oversized to ensure no restrictions.

For your outfit, you can certainly opt for a size larger than you usually take, but it is not critical, you can still choose your standard size and still get the look. For my photos, I chose one of my slim fitted overcoats and hung it over my shoulders, which is a favoured representation of the Italian mafia in movies, yet equally appropriate when creating a Peaky Blinders outfit.

You can also choose to merely sling your coat over your arm (another favourite in gangster movies, allowing the character to conceal a weapon) for a more informal and relaxed look, this helps if your coat is too slim to fit over your suit, but don’t want to splash out on an otherwise too large coat for this single occasion.

For an extensive range of wool coats in a diverse selection of colours, check out my following selections. 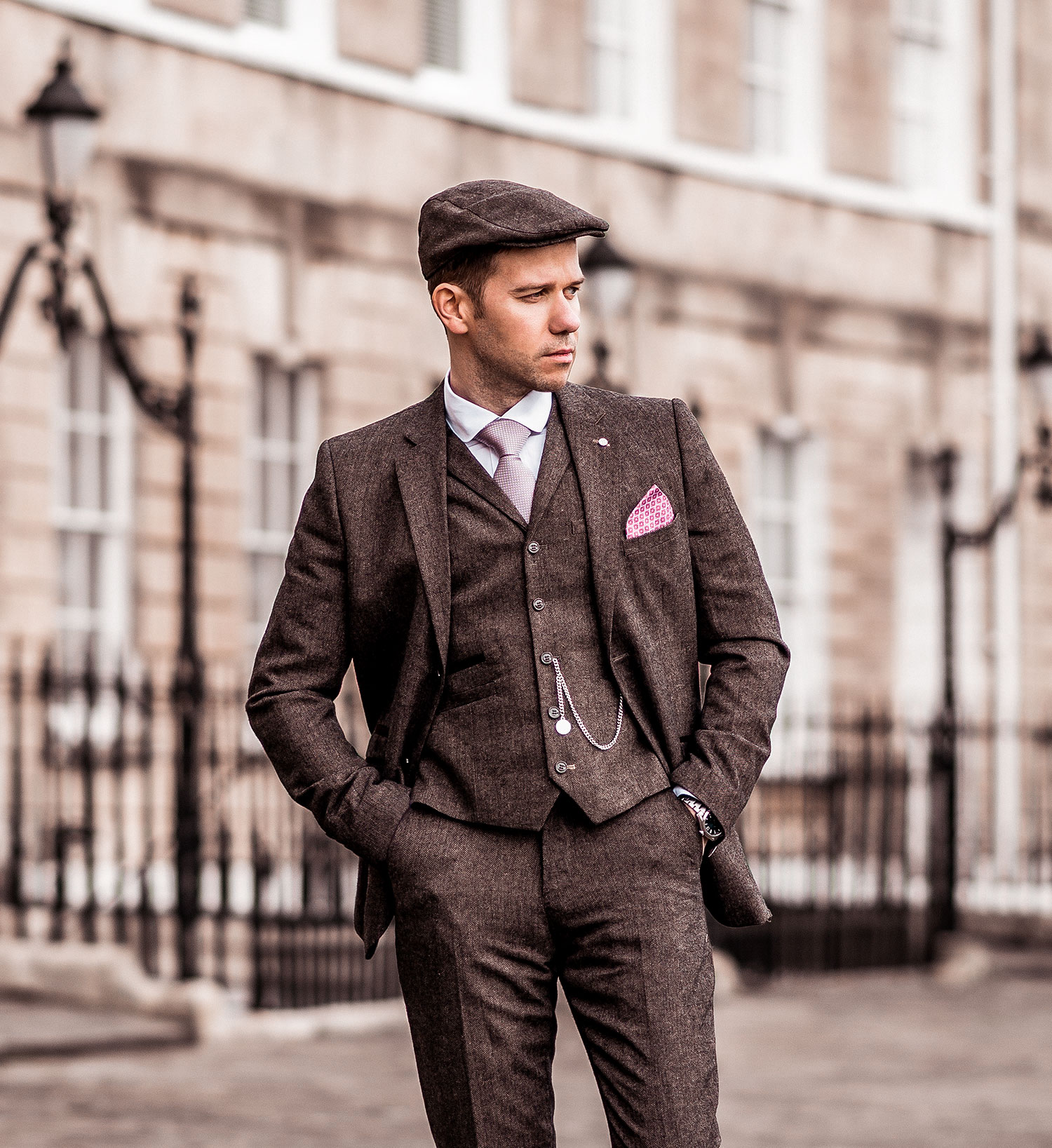 There is no question that the flat cap is that one item which can make or break your Peaky Blinders outfit, the boys in the show are rarely seen sans-hat, so you too must conform if you want to emulate them to a satisfactory standard. Flat caps were incredibly popular at that time, but their history goes much further back, with evidence they were originally created as early as the 1500s when the English government was trying to build the economy using the sale of wool. It was even reportedly a crime to not wear a hat in these early years, and fines were profusely given out to all offenders. When this particularly strict law was thankfully abolished, most working men had grown accustomed to the look and continued wearing them regardless, and the trend carried on for generations.

When choosing a hat style for your Shelby outfit, there are two variations which are instantly recognisable from the show. Either the more traditional flat peak version (as can be seen in my photos) which elongates the face, giving a more streamlined appearance and is my personal favourite. Alternatively, you can opt for the baker boy style, which is much more rounded and fuller in structure, in my opinion, this design only suits a more structured and longer face. The latter is the model which seemingly features more prominently in the show, particularly popular with the main Shelby brother characters.

With the advent of the show, it is a relatively simple affair to pick up a flat cap; even high street stores often stock a wide variety of different patterns and colours. As with the suit, if you want to nail the look of the time period, I would pick from a muted colour palette. If possible, matching your hat to your suit can look very effective (as seen in my images), but even mismatched gives a strong visual display, but can frequently be more challenging to pull effectively.

When it comes to quality, you can go all out and pay for a full tweed flat cap, or you can play the game more conservatively and instead settle for a blended model. Both look equally good to the untrained eye, only when you look closely do you see the benefits of the pure tweed model. The choice is yours.

I consider these stores a great place to select your Peaky Blinders flat cap. 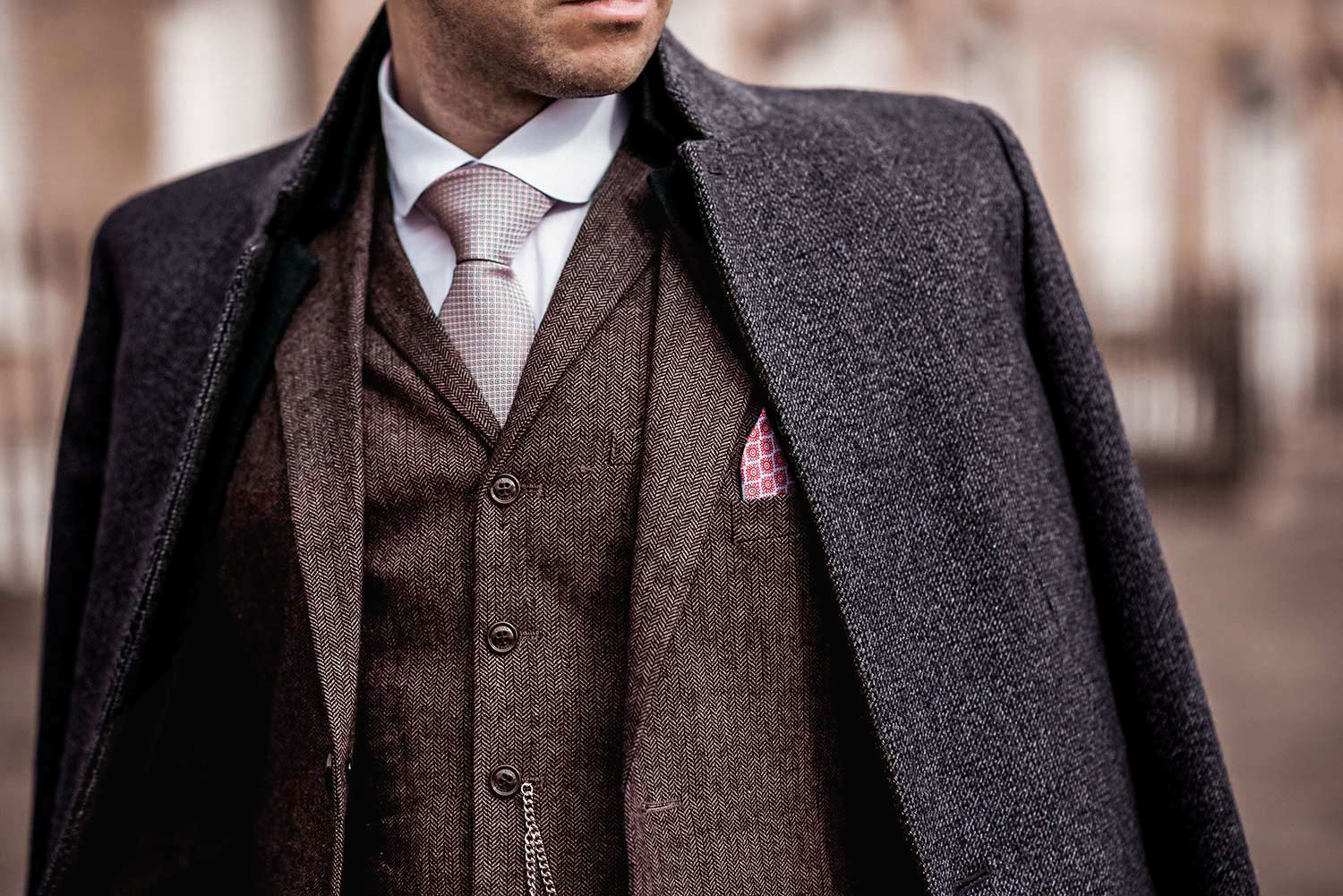 When pairing a suitable shirt with your three-piece tweed suit, you have two stand out choices. Firstly you can opt for a classic white shirt with a traditional pointy collar; this style is a perfectly acceptable companion to your ensemble. Otherwise, you can go one step further with a round neck collar, its unique style a prominent feature on the TV show.

Formerly popular by boys who attended the world famous Eton College in the mid 1800s, its name was influenced and ultimately changed to ‘club collar’ because of this association. It’s stated that only those who attended Eton were allowed club membership and this particular style of collar was exclusive to them. However, as with all things in fashion, this trend began to filter down to the masses and was considered a more stylish way to wear a shirt. It is only natural that the Peaky Blinders, who always demanded to look good would adopt this design during their reign of power.

Up until very recently, it was quite an unenviable task to try and acquire a round collar shirt, with very few available except from a few specialist stores. Again, due to the widespread appeal of the show and the growing popularity of the dapper gent look, many shops, both online and bricks and mortar are increasingly offering a number of round neck shirts to their collection.

Check out my top picks for a fantastic selection of shirts. 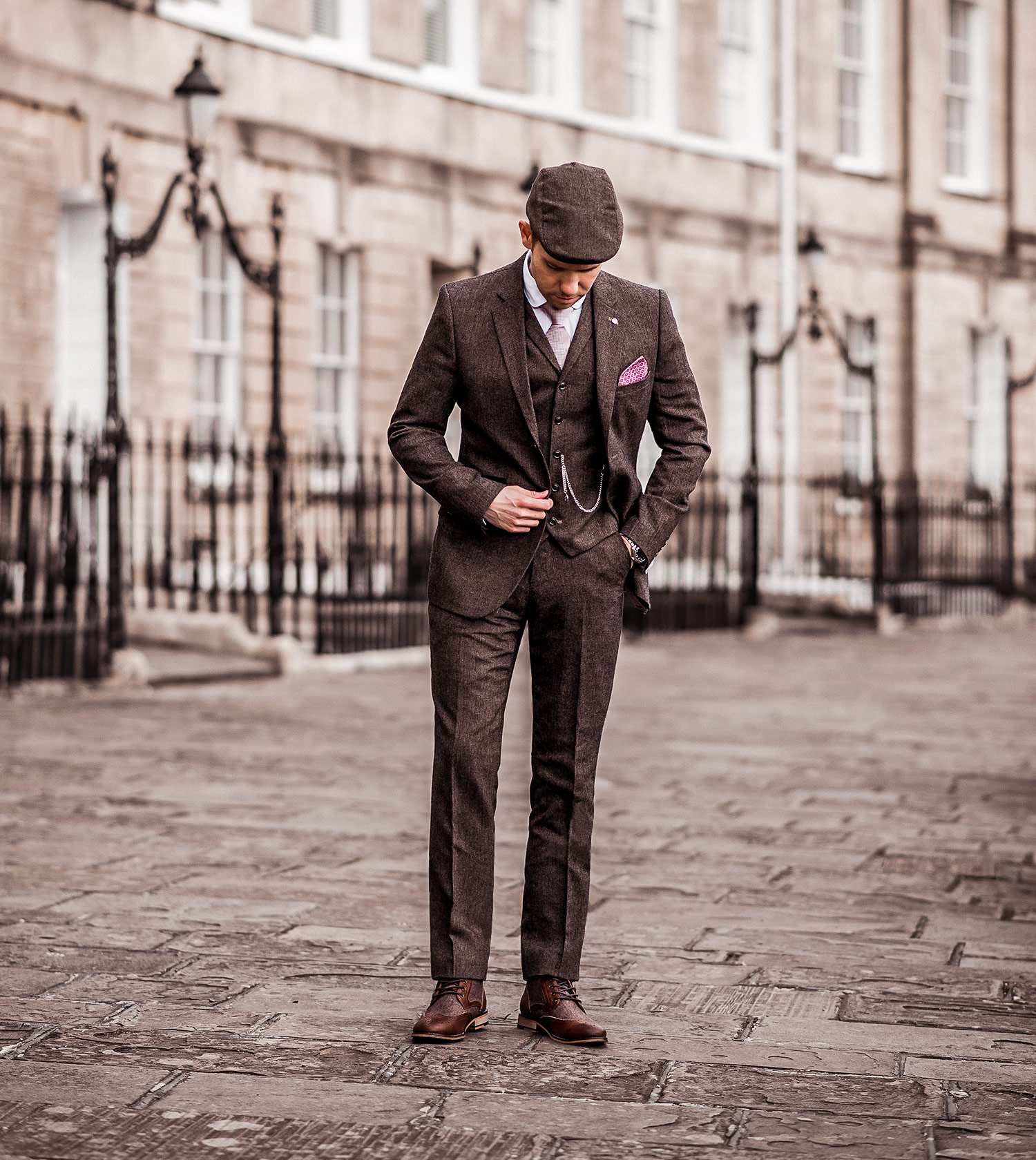 Even if the majority of your outfit is bathed in muted and muddy tones, you can add some colour to the proceedings with your tie and pocket square. This is the one area you can go wild and add a splash of vibrancy to your outfit. Even so, don’t go too outlandish as to appear garish, after all, you are attempting to replicate a tough old English gangster! For my shoot, I chose a simple pale pink textured tie and paired it with a circular patterned pocket square for a contrasting effect.

If you are looking for a great selection of tie sets, I would recommend. 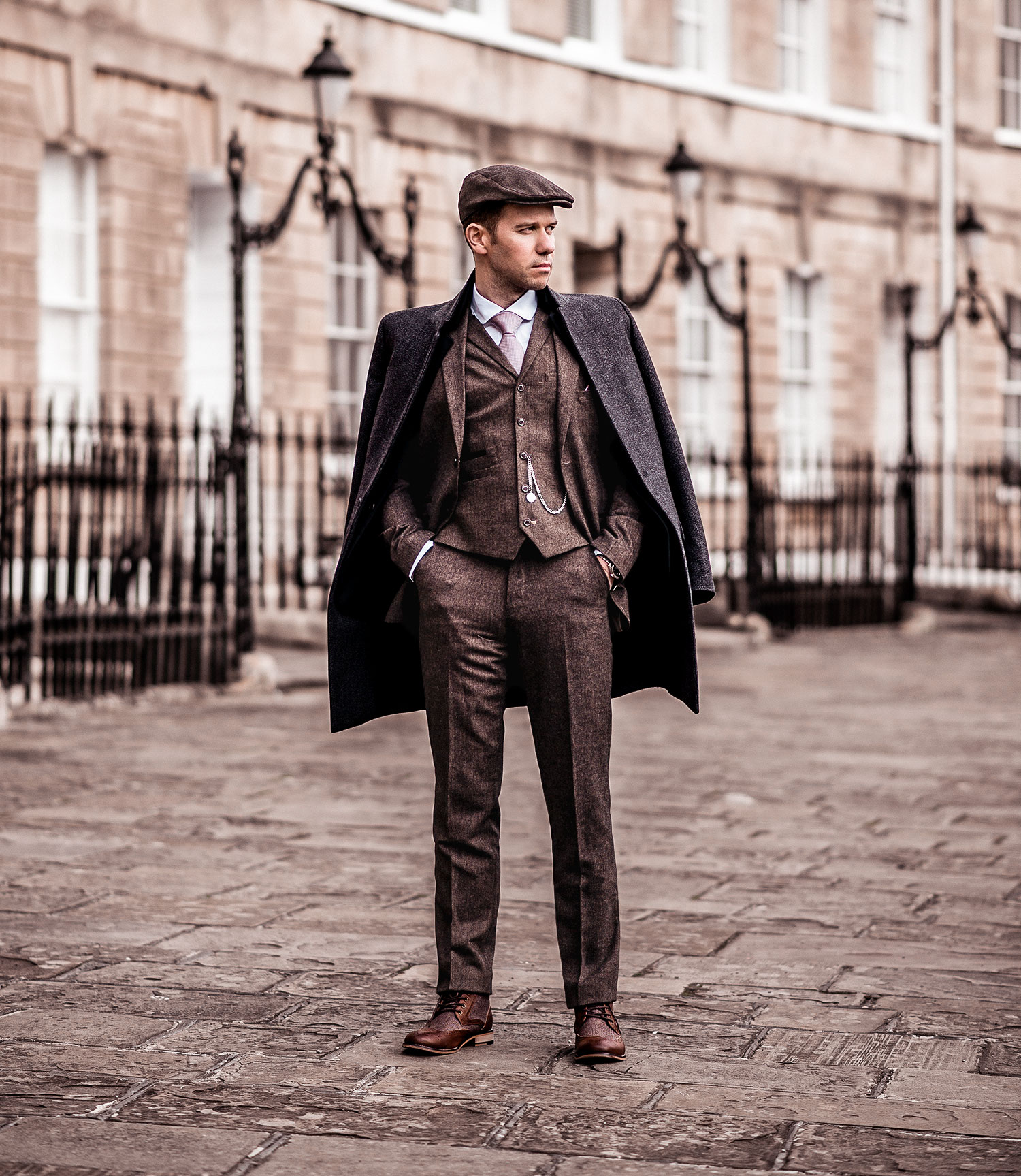 Unlike the well-paved city streets we now take for granted, back in the early years of the 20th century in Birmingham, the floors were awash with dirt, mud and if you were lucky, hard cobblestones. Naturally, this harsh ground required tough shoes for these hardened men, keep your outfit on point with the period by forgoing modern footwear luxuries in favour of heavy-duty footwear. Brogue style lace-up boots and shoes are the order of the day when suiting up, bonus points for acquiring a pair with additional tweed sections.

I would highly endorse this next set of stores for a classic pair of boots or shoes, offering a vast selection of different options for the look you are trying to achieve. 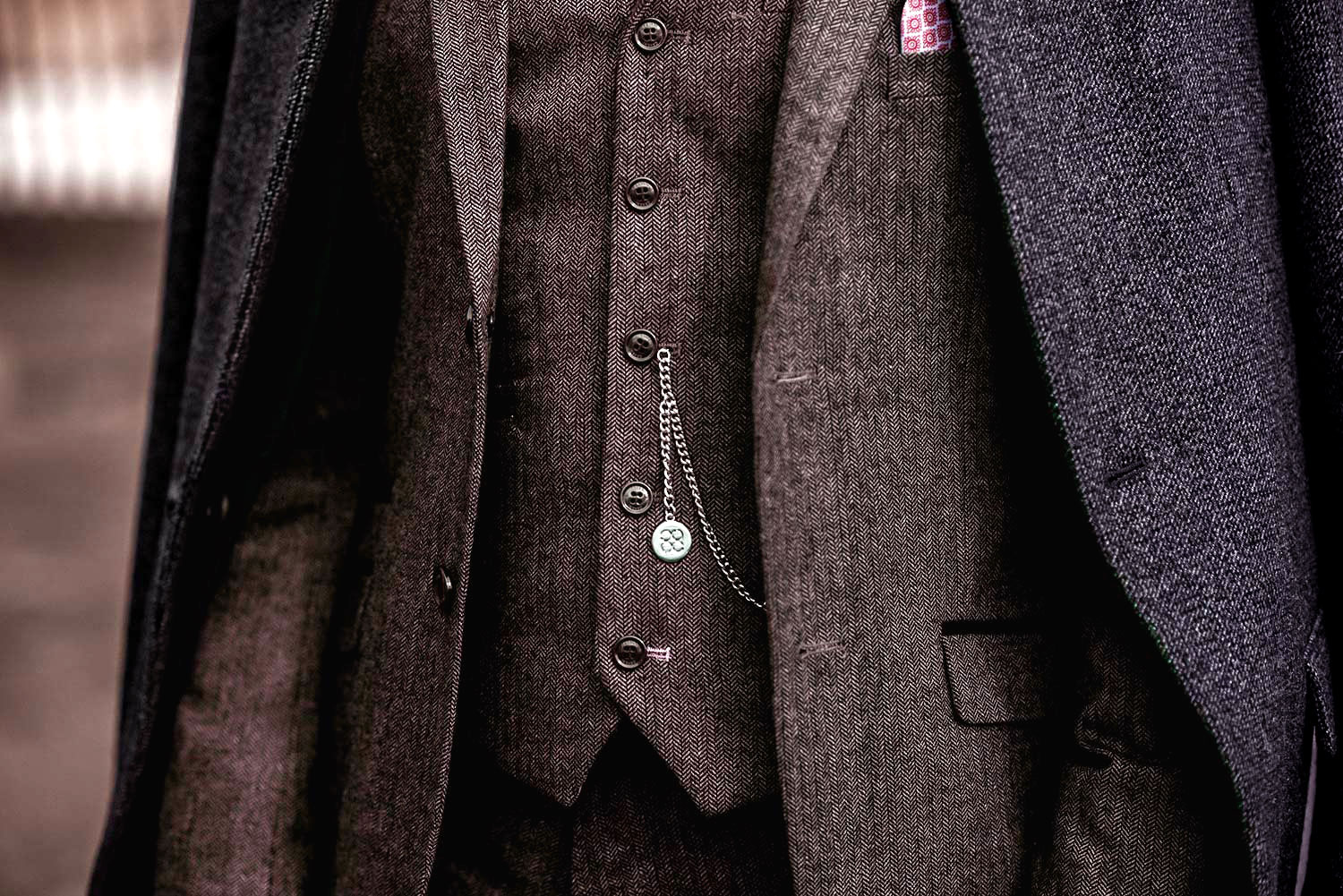 Finally, we have the accessories, which can finish off your outfit dramatically. You can grab a pocket watch chain which attaches to your waistcoat, clipping to the small pocket and wrapping around one of the buttons (alternatively, if you are feeling flush you can go for a genuine pocket watch). Wristwatches can be a beautiful finishing piece; the Shelby’s routinely wearing a round face design with a leather strap. For my current take on the style, I choose an automatic watch with metal bracelet watch for a modern twist. Even so, a digital timepiece would be one step too far and a huge no-no!

I will complete this guide with a quick bullet point section of the necessary pieces to complete your Peaky Blinders outfit, consider it a useful shopping checklist.

Hopefully, this guide has helped point you in the right direction when picking out your ideal Peaky Blinders outfit! If you have any questions or even suggestions, please feel free to use the comment section below, I would love to hear from you!

I will complete my review with a look back at the very first series trailer. 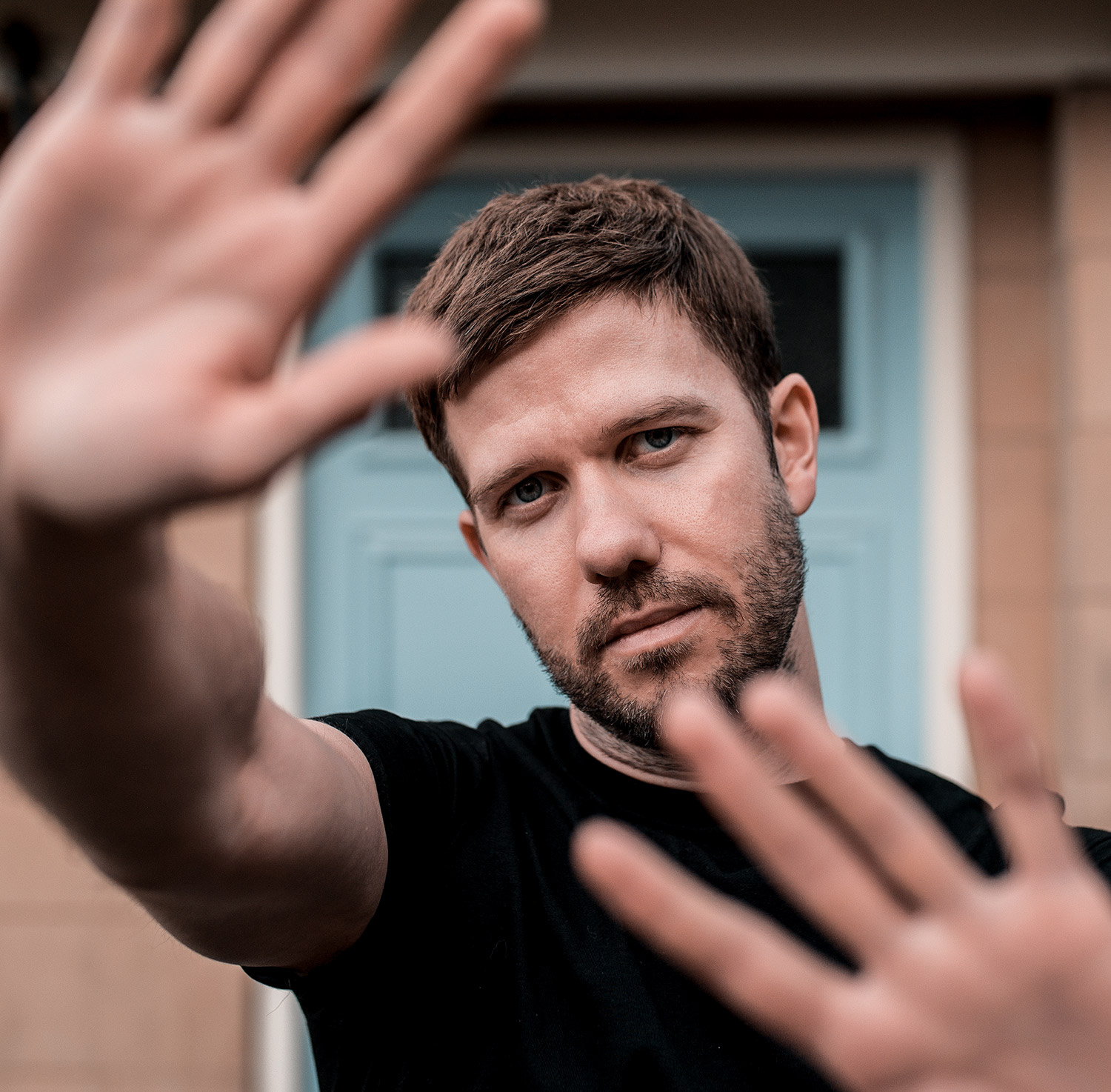