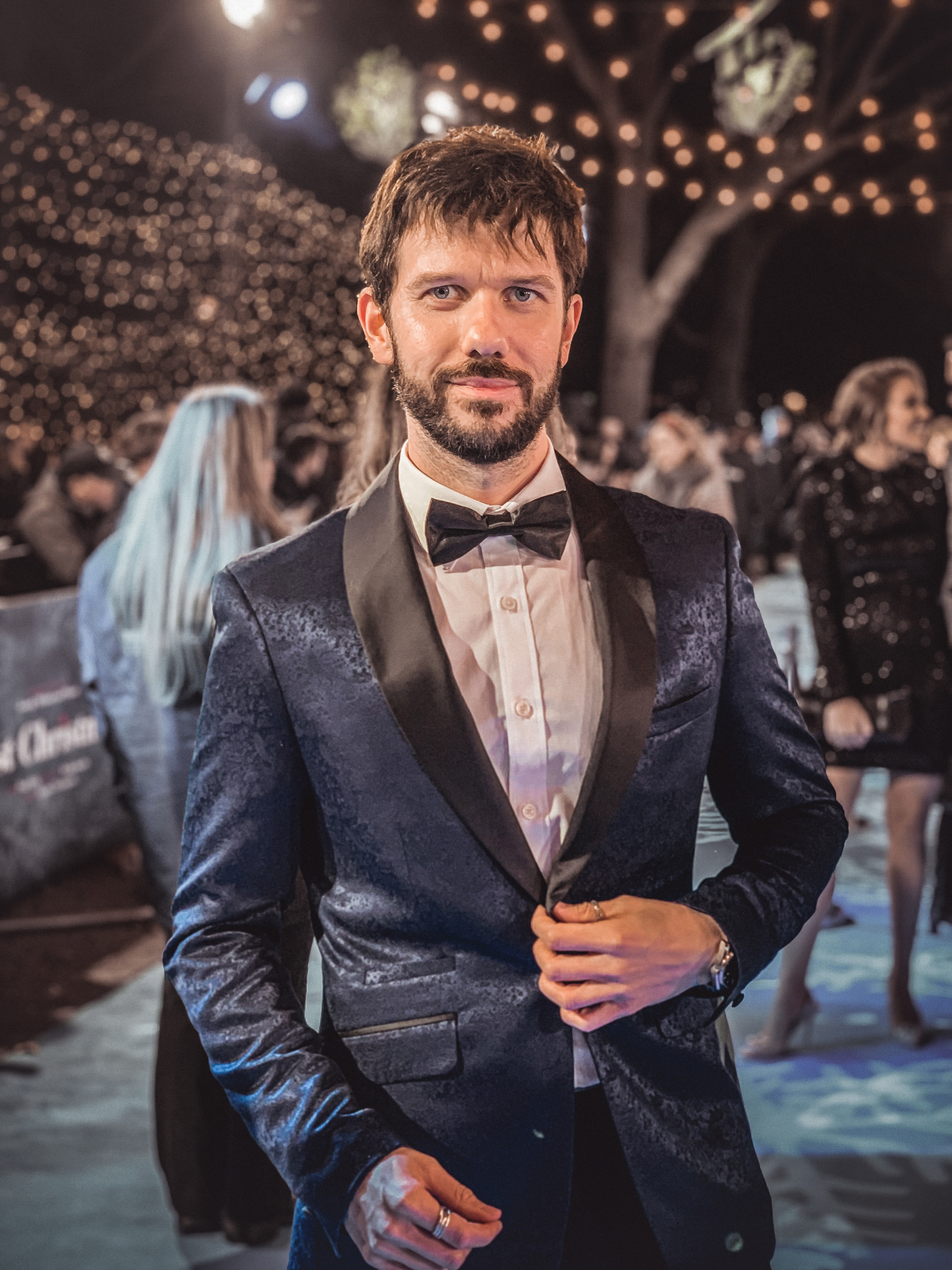 Exciting news for my latest men’s fashion blog post! I was given the fantastic opportunity to walk down the red (in this case blue!) carpet for the movie premiere of Last Christmas. Read on to find out more!

The event was in BFI Southbank, London which was beautifully decorated for the upcoming Christmas season, rather than the typical red carpet for such events, instead was a bright and bold blue colour with snowflake lighting panning across the ground (very festive!).

As we walked along the carpet, crowds gathered on each opposing side, hoping to catch a glimpse of stars and celebs who were due to attend. At the end of the walkway, we came across a wooden seat mimicking the one which is pivotal during the movie; we used this prop to good effect, snapping photos of each of us together and individually (grabbed a guy off the carpet to take shots of us using my phone!).

As we were about to head inside, there was a tremendous commotion coming from the photographers and press, then we heard their voices calling out “Kylie!” and we realised Kylie Minogue was heading down the carpet towards us! She took a brief moment to get a selfie with a fan over the barrier and hurriedly ventured inside. Once we entered the building, we made our way to the door to the cinema itself and were welcomed in, Kylie was standing close by with someone (I guess her PA), so I decided to take the bull by the horns and approach her for a photograph! Fortunately, she was very gracious and allowed me to get a photo with her (my 15-year-old self would have been ecstatic!).

We passed many seats which were earmarked for the cast and crew and reached our own numbered places, which included a goody bag (containing Godiva chocolate!). Once the cinema was full, the director – Paul Feig and main cast – Emilia Clarke, Henry Golding and Emma Thompson walked out in front of the big screen, sharing how the movie came into being and a few anecdotes before heading to their seats to enjoy the show.

I’m happy to report that the movie was fantastic! I do love a good Christmas movie, and this ticks all the right boxes – funny but also meaningful and poignant, definitely worth a watch! I can see it being one of those movies we watch every year on the lead up to the 25th of December.
It is worth noting that the end credits feature a brand new unreleased track from the late great George Michael (the film itself is a massive tribute to the legendary singer). Amazingly we even came across Andrew Ridgely (from Wham) as we were leaving who had on the most amazing purple suit! 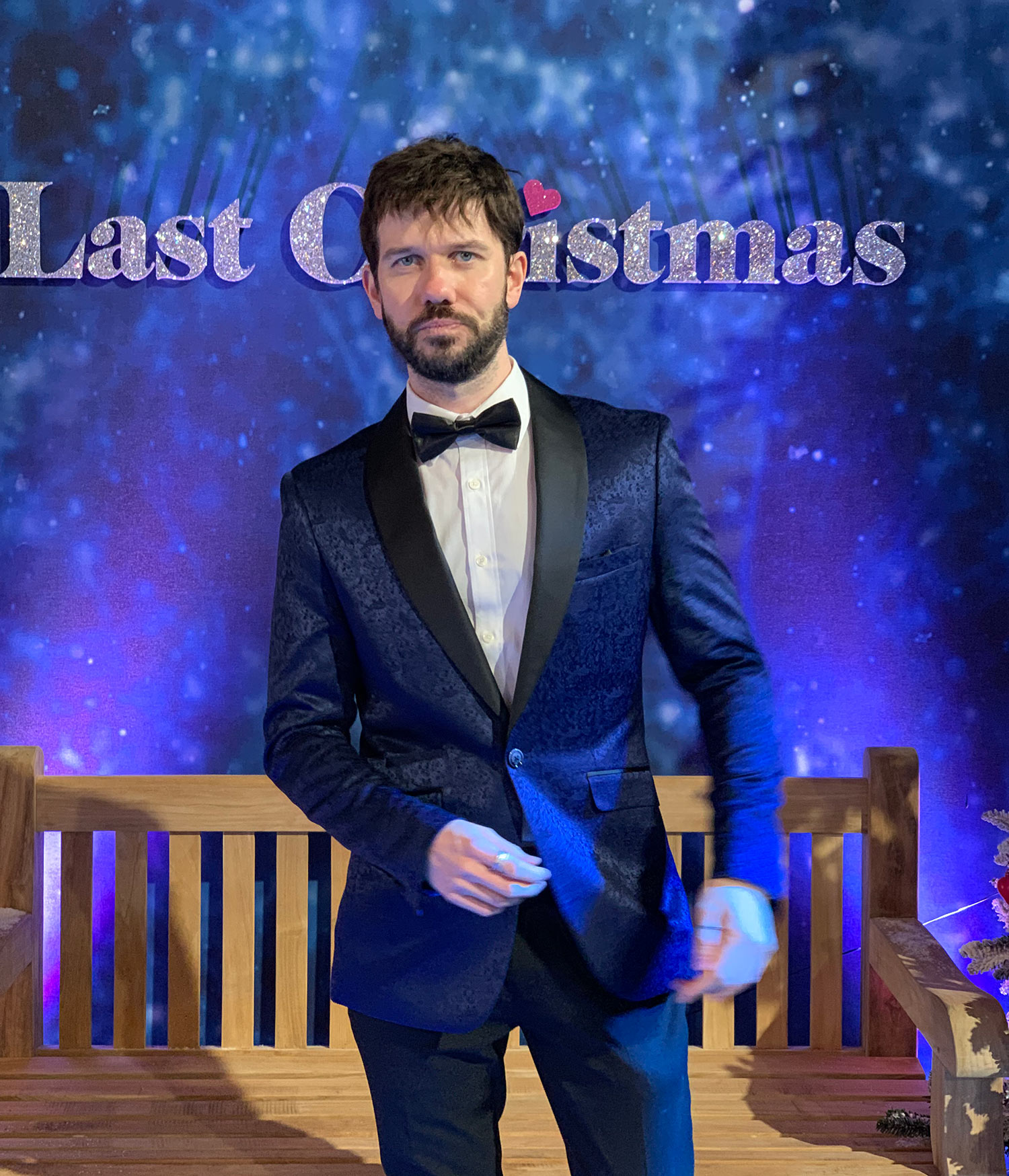 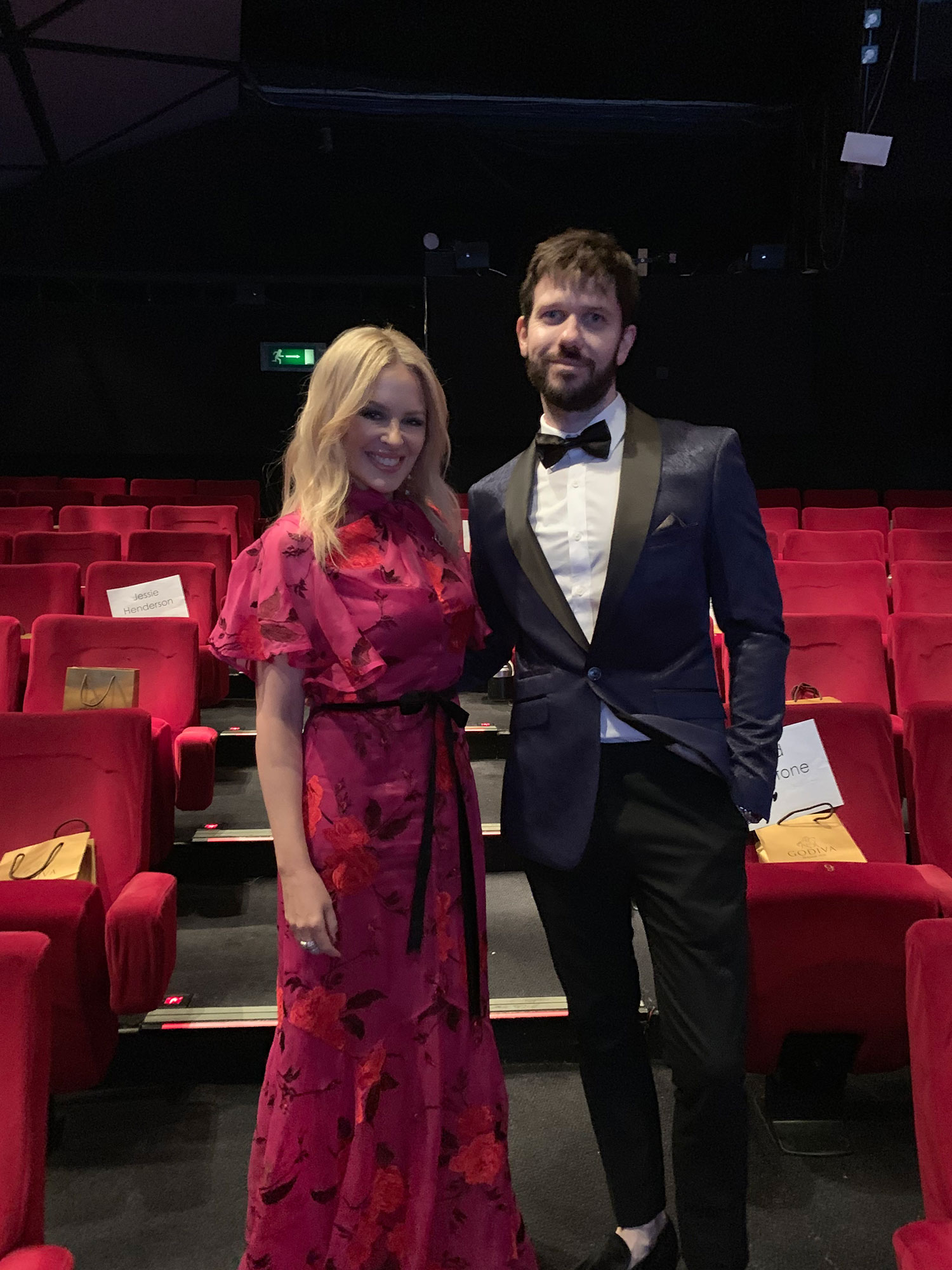 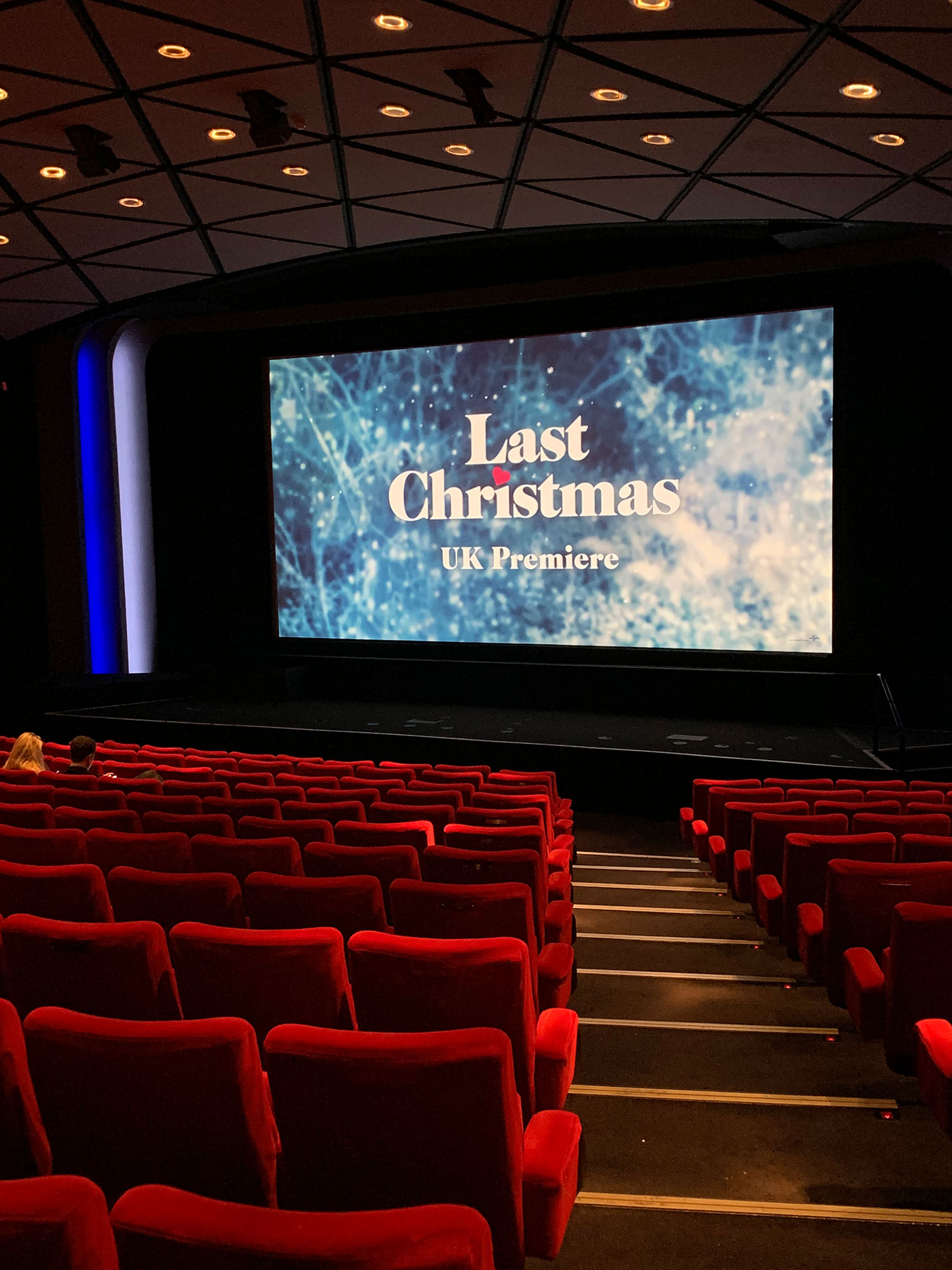 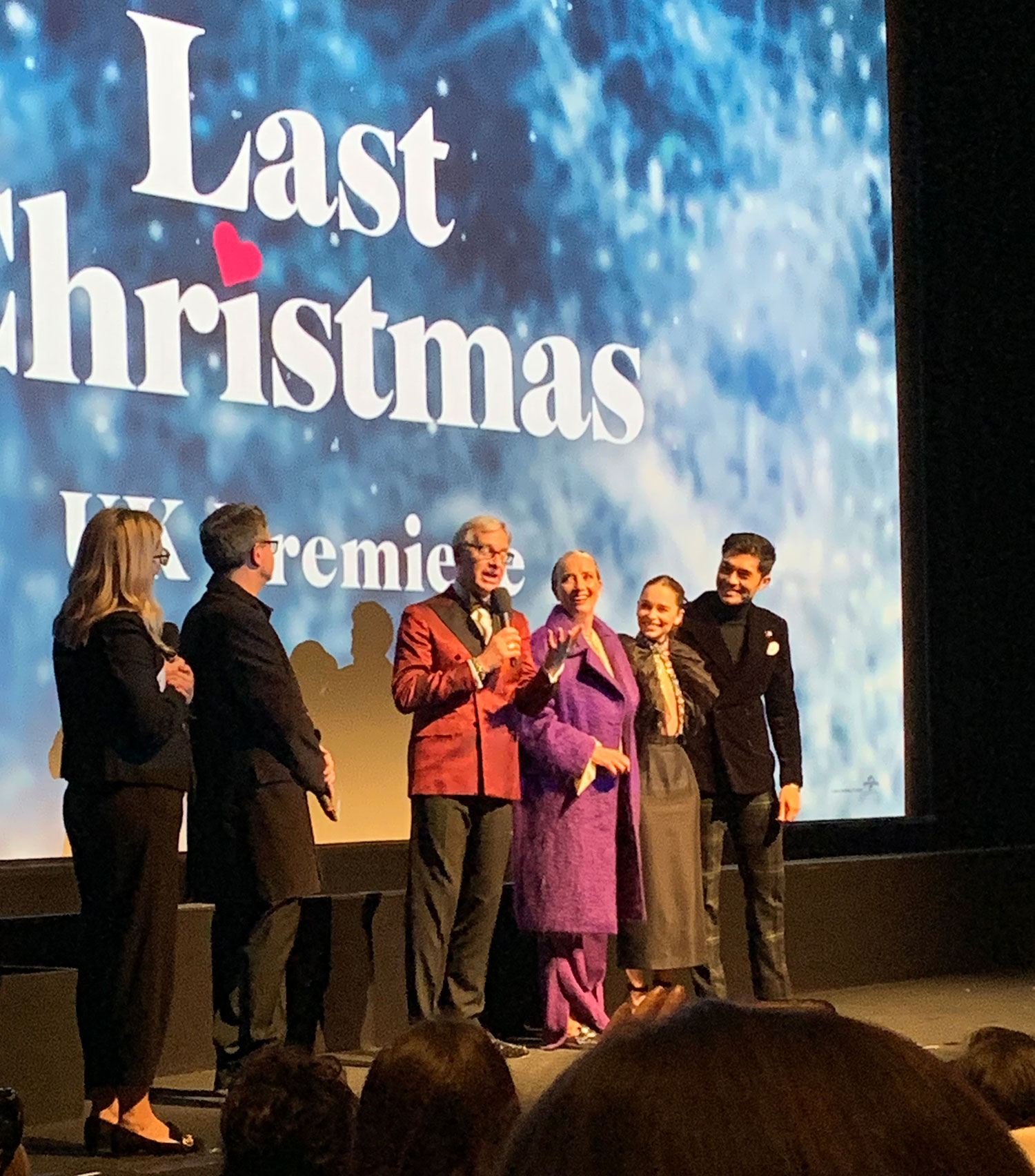 The Last Christmas movie celebrations didn’t end there though, the next evening we were invited to watch the switching on of the Christmas lights at Covent Garden. We were located in a cordoned-off VIP section in which we had a great view of Ronan Keating presenting and of Emma Thompson switching on the lights on the count of 10.

Once lit up, you could not be anything but amazed at the beautiful tree and the surrounding decorations. The crowd mistakenly believed the event was over when suddenly music began to play, and the screen sprung to life, streaming George Michael singing ‘Last Christmas’, this heartwarming moment was made even more magical when the crowd started to sing along with it too! 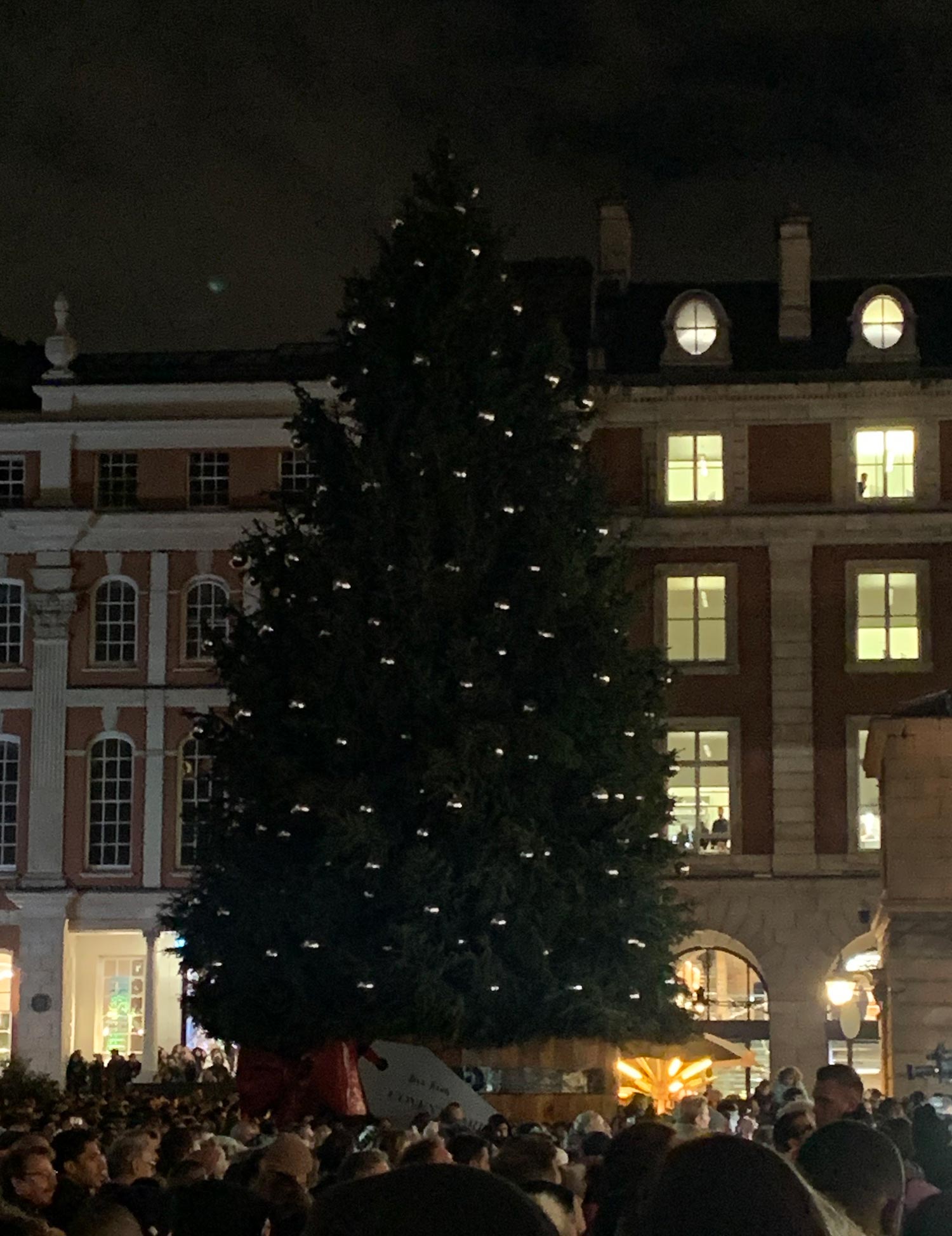 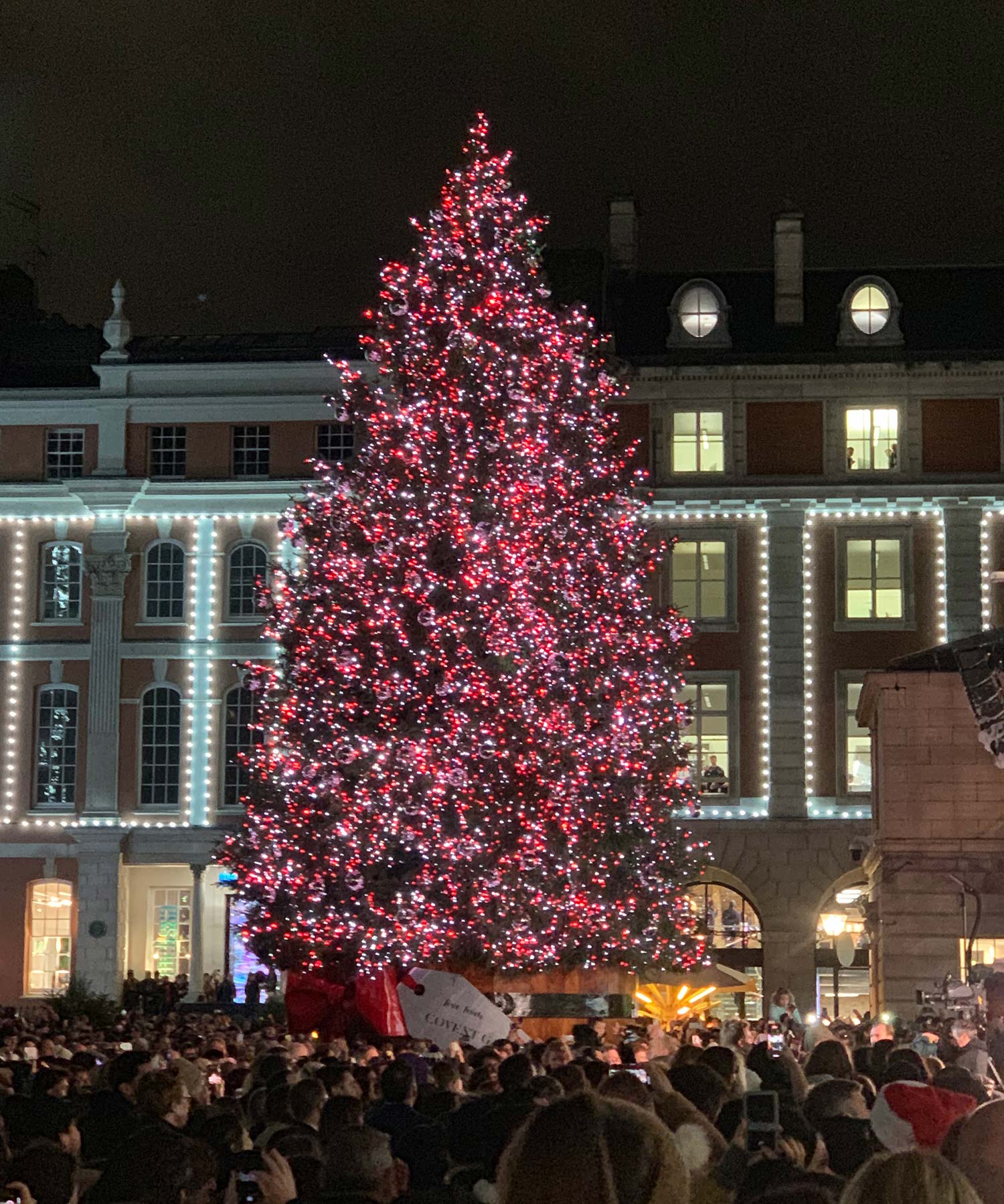 Special mention goes out to Holiday Inn Express London Newark Hotel who gifted us a complimentary room for the night. The hotel was situated mere minutes from the premiere. The room was spacious with a fantastic outside view of London (particularly impressive at night!), the bed was incredibly comfy and even had the option of flipping over the pillows for a soft or firm material (a very welcome addition!). I must make a point of praising the shower, many hotels fail in this department, not so at Southwark! The shower head is removable for better reach, and the temperature is consistent throughout (another win!).

The staff at the hotel were lovely, particularly the manager who was on duty on Monday evening, asking us how the event played out and also offering us a coffee after our long night out. I highly recommend it to anyone staying in the area when visiting London.

What do you think of my latest post? Do you plan on watching the Last Christmas movie or have you already seen it? Let me know in the comments below! 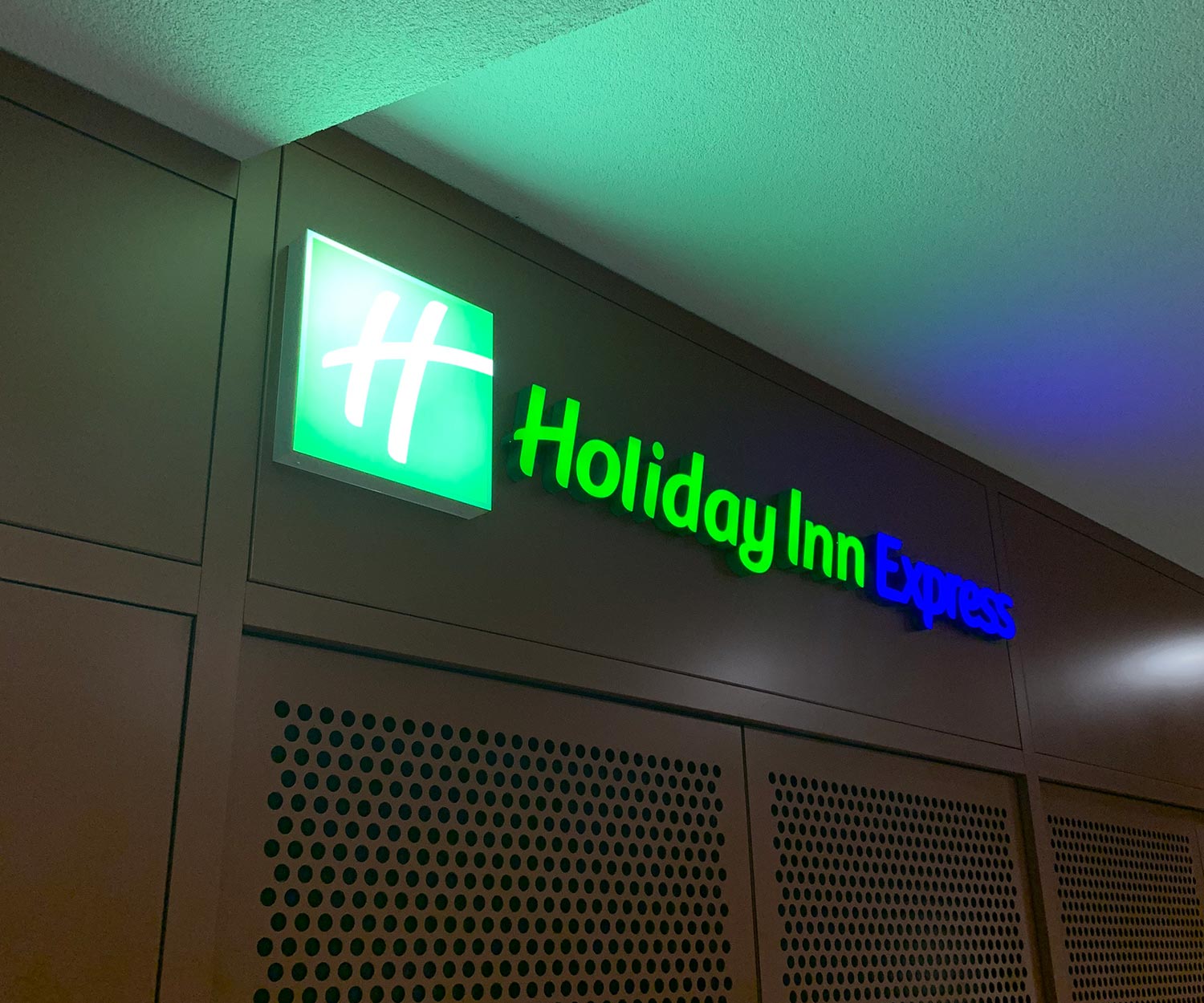 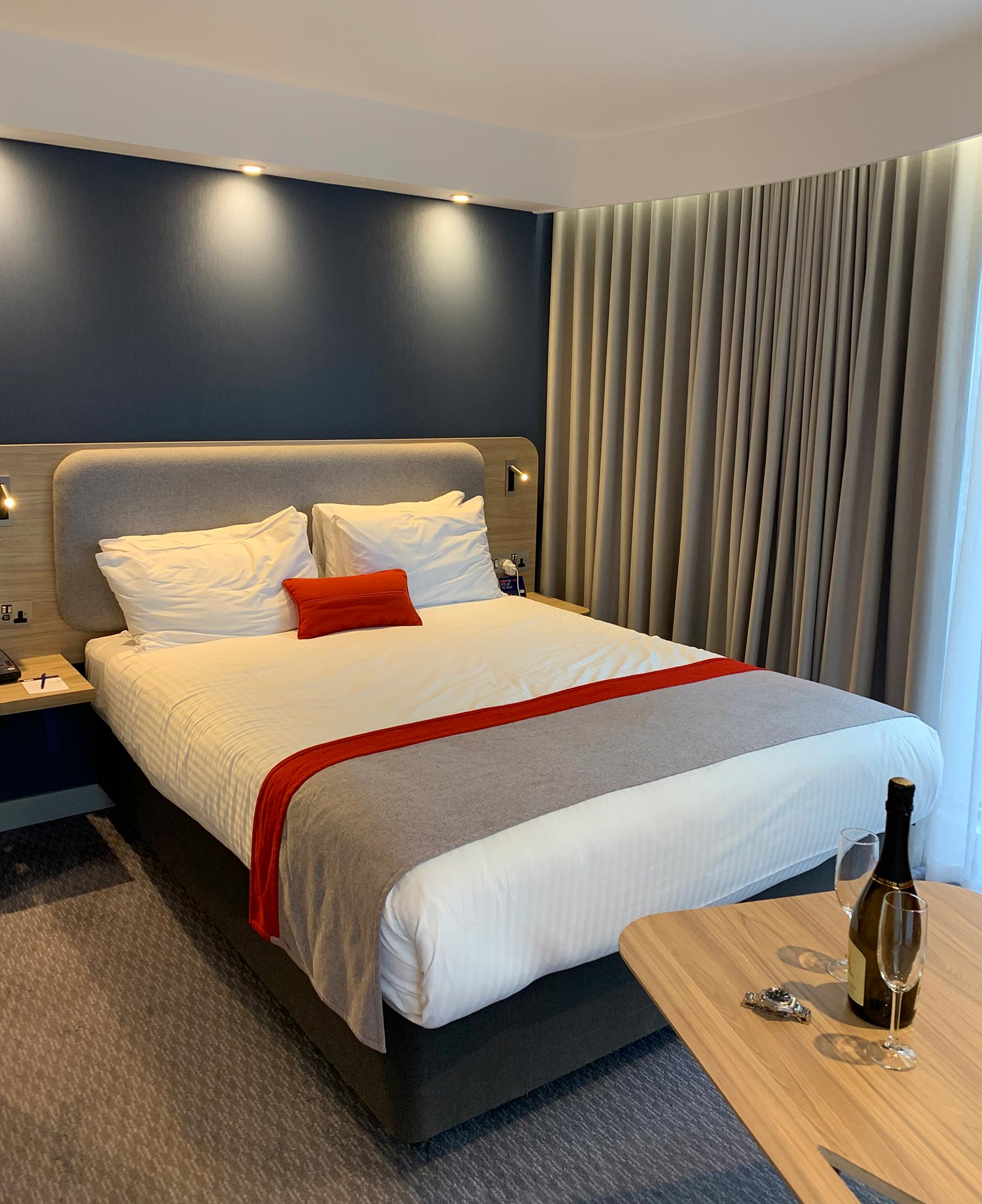 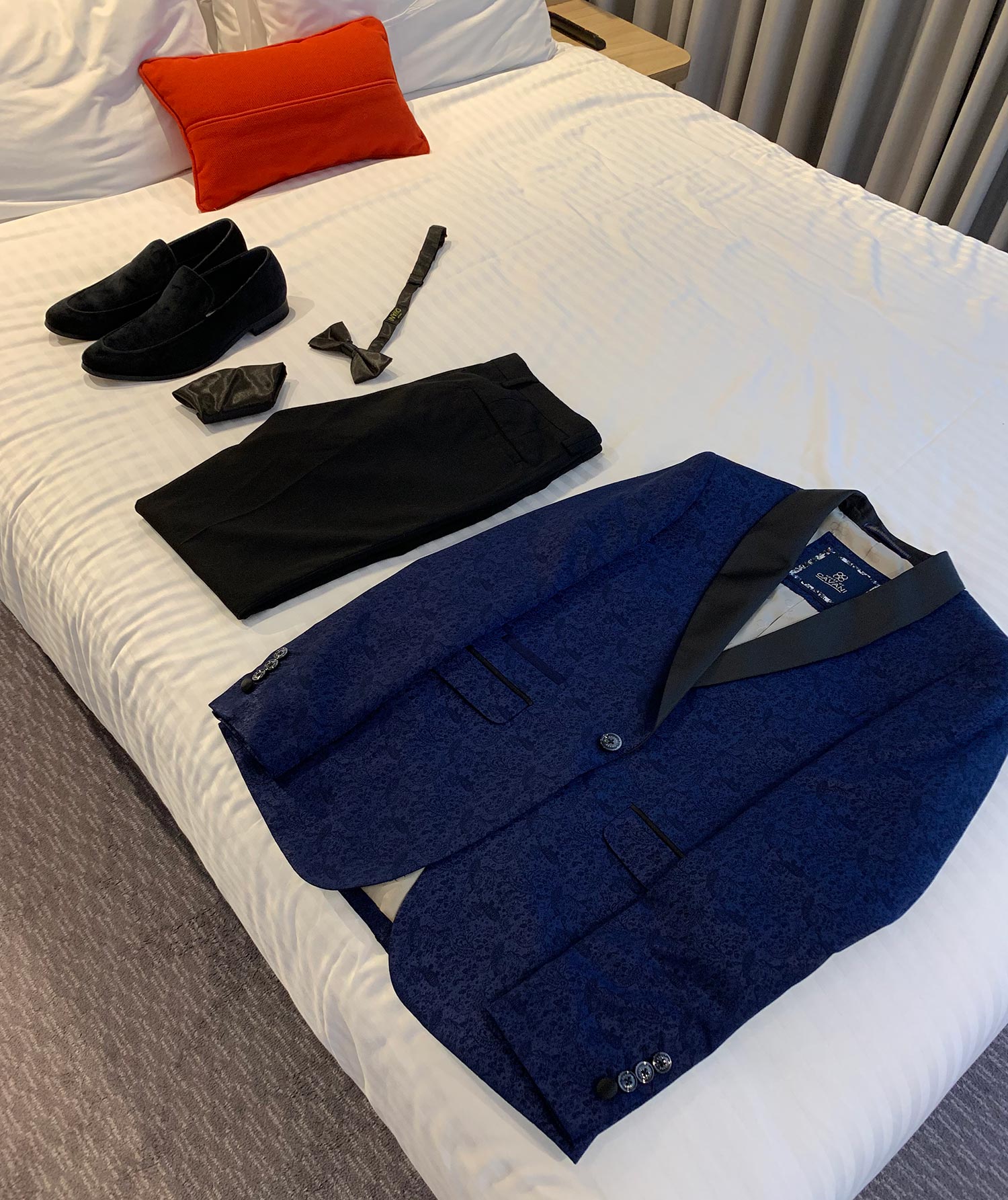